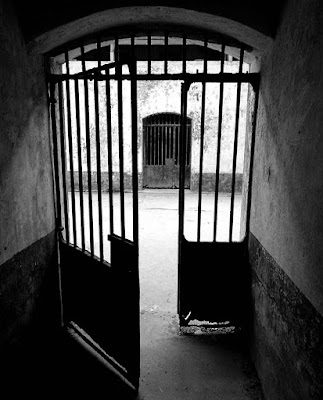 Anyone of a certain age will recall the 1973 movie “Papillon” where characters played by Steve McQueen and a young Dustin Hoffman are transported by ship to a distant tropical island that was anything but paradise. And our visit to the so-called “Devil’s Islands,” 15 kilometers off the coast of French Guiana, confirmed that this hell-hole was every bit a reality. Le Soleal anchored a short tender ride from the southernmost point of L’Ile Royale, the largest of the three islands that make up this group. Covering 21 hectares, two points rise to a maximum of almost 50 meters and contain the most prominent structures of this God-forsaken outpost.

There are more than 20 accessible sites on the island that include a hospital, convict cells, warders’ mess (now a small hotel) and various ancillary buildings. Restoration of a few buildings has been completed, but other works appear to have stalled and there is discarded materials everywhere else.

Furry agouti (large jungle rodents about the size of a small dog) scamper about the lawns gnawing at the fallen coconuts, an activity they have become most proficient at. Deeper in the undergrowth, a population of Capuchin monkeys squeak and scurry among the leaf litter and hang off vines. These cute, docile little primates will politely approach guests to inquire about treats like apples and nuts. One tiny monkey kept us amused for several minutes as he twitched and flinched at the strange taste of a kiwi fruit, although the foreign flavors did not deter him from devouring every morsel. 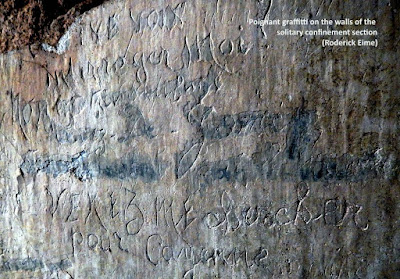 But it’s the palpable misery of the claustrophobic cells that will remain in my memory. Floor space of just a few square meters, sometimes without a roof, is all prisoners were allowed in these squalid alcoves. Hidden in some of the most depressing cells, pathetic graffiti scratched into the plaster tells of their torment and yearning for home. Solitary confinement was a common punishment for harder convicts, sometimes lasting for years. In the 150 years this cursed penal colony operated, more than 70,000 murderers, political detainees, spies and lunatics arrived at these shores, with all but a handful ever returning to France. Most were assigned to the shark-infested waters a few cable lengths from shore when their term expired prematurely. 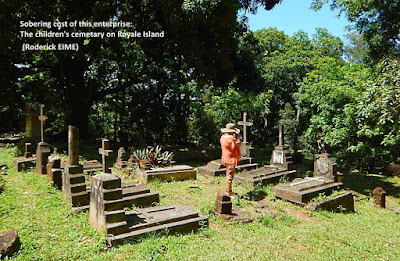 Returning to the lavish comforts of Le Soleal was quite a jolt, but quickly soothed by Sous-chef Laurent’s tender pork loin followed by four flavors of ice-cream. Viva La France!

For further information about Ponant’s vast range of expeditions and destinations, see www.ponant.com